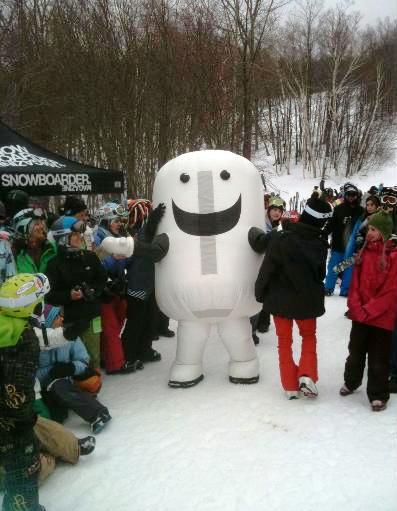 Handing out close to $500,000 in cash and prizes, last week’s Burton US Open of Snowboarding Championships at Stratton Mountain, Vermont, attracted thousands of spectators and most of the sports’ top competitors with Kazuhiro Kokubo (Japan) and Kelly Clark (USA) winning the US Open Halfpipe titles. In addition, Clark and Peetu Piiroinen (Finland) took the Burton Global Open Series titles, earning $50,000 each, plus the newly introduced MINI Countryman four-door, AWD car.

Beyond the competition, there is another world of sponsors, vendors and customers all looking for a piece of the action. Mountain Dew had long lines all day Saturday with “testers” anxious to try several new experimental flavors including White Out, Code Red and Voltage, created in part by fans through social media. First-time sponsor Nokia had a booth explaining its Push Snowboarding project, featuring a phone that can test a riders’ speed, heart rate, foot pressure, rotation and more based on a series of sensor technologies.

Rain, snow and cold temperatures made it a challenging week for competitors and spectators, but on Saturday the weather cleared and Stratton’s near-record snowfall of 190 inches so far this season ensured great conditions. “It was a tough start with the weather but good for us -it was cold and rainy so everyone was spending time in our tent,” says John Beal of Select Design representing Revv coffee, a division of Green Mountain Coffee.

iPads were sponsors’ medium of choice, with Revv asking attendees to sign up on Facebook. “We were giving away stuff based on that,” says Beal. MINI let people spin its prize wheel after they filled out a form on the iPad supplying email addresses. Burton collected phone numbers and emails by asking people to text a number to win items from the spring/summer clothing collections.

Judging by the list of new and returning sponsors, the Open continues to be a good value. “The crowd was much larger than I had imagined,” says Jim McDowell, chief motorer for MINI USA, this year’s presenting sponsor. “I think it was a very successful event for MINI. There was a lot of interest in our cars, especially the new MINI Countryman.”

Later this month, the car company will also be giving away the MINI Creative Use of Space Award, worth a total of $50,000, to be shared by best male and female rider who have shown creativity and progression throughout the BGOS series (vote at facebook.com/mini).

As part of a push to make the sponsor village more festival-like, there were lots of new components at this year’s Open such as test-drives by MINI, ethnic food, vendors and several live bands. Sponsors gave out samples, T-shirts, goggle wipes and more.

“Back in the day, there was a much more organic feel to the Open and we wanted to try to bring that back this year,” says Liam Griffin, Burton’s global events director, who added that the impetus came from Jake.

Burton created Shakedown Street, a vendor village with six different crews selling various products. “It’s not just about free stuff but about the different things you can seek out and buy,” says Griffin, who added that the Open posters were based on the album artwork for Shakedown Street by the Grateful Dead.

Even the competition sites were different at the Open this year: the halfpipe was further down the hill for easier viewing, the slopestyle event was in a different location, as was the Friday night rail jam held at the main mountain. Stratton took advantage of the event, too, opening up its main base area to vendors like Stonyfield Farm organic yogurt. Nearby, Oakley set up a “goggle bar” with Syd and Dusty’s snowboard shop to help clients custom-fit new goggles.

“We’ve been in the same place a long time, but that doesn’t mean you have to keep doing the same thing,” says Griffin, who added that the ‘60s-style parties were in different spots, too. Of special interest was Chill’s US Open Benefit party featuring Stefan Lessard from the Dave Matthews band. Chill is a non-profit organization that takes underserved youth snowboarding to help them accomplish goals both on the slopes and off. The event was sponsored by Target, Anheuser Busch and Pepsi and attracted Kelly Clark who hung with the Chill kids.

“It’s not just about snowboarding,” says Megan Skiles, Chill’s national coordinator. “It’s a tool to show kids that if you stick with something, you can be successful.” 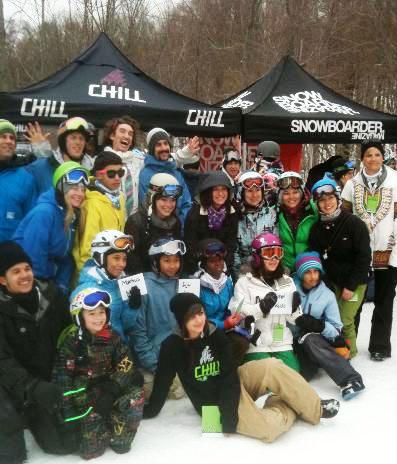