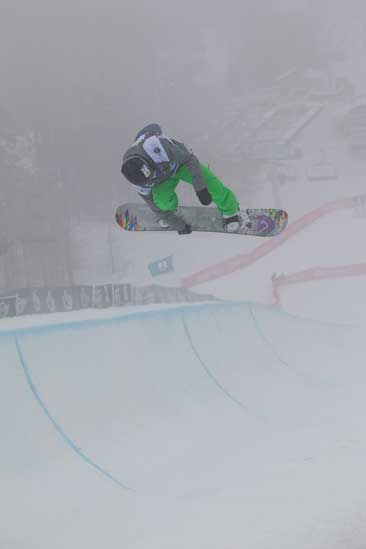 The women kicked things off under snowy skies, and 21 ladies competed for the six spots in the finals. The ladies pulled together solid runs led by Vermont locals Kelly Clark (USA) and Hannah Teter (USA), who easily qualified for finals in first and second place respectively.

In the men’s semi-finals, 39 men had two runs to secure one of the 10 spots in finals. Last year’s US Open champion Kazuhiro Kokubo (JPN) showed that he has what it takes to defend his title, scoring a 96.67. Iouri Podladtchikov (SUI) topped Kazu’s score with a 98.00 and will also be a strong contender in Saturday’s halfpipe finals.

Tomorrow is another big day at the US Open, kicking off with men’s and women’s slopestyle finals during the day in the Sun Bowl base area. Top riders like Mark McMorris (CAN), Eric Willet (USA), Chas Guldemond (USA), Jamie Anderson (USA) and Enni Rukajärvi (FIN) will all compete for a coveted US Open slopestyle title. Then in the evening, the action moves over to the main base area of Stratton Mountain for ‘The Jam’ followed by a free Flosstradamus show.

If you can’t make it to Stratton, check out replays of the semi-finals and live webcasts of slopestyle and halfpipe finals at burton.com or metacafe.com. The US Open, presented by MINI, will also air on ESPN2 on March 13 at 4:30 p.m. EST.

High-res photos from the 2011 US Open will be available at:
www.opensnowboarding.com in the Press section of the US Open website
Username: bgospress
Password: bgospress
Photo Credit: Shem Roose

About the Burton Global Open Series
The Burton Global Open Series events are the pinnacle snowboarding events of the season. Founded by Jake Burton, the Opens have grown from grassroots events to a global competition series, attracting tens of thousands of spectators and riders from around the world. Since the beginning, the Opens have been driven by riders, for riders evolving with snowboarding and riders’ needs over the years. With events held in New Zealand, Europe, Canada and the United States, the Opens set the standard for snowboarding events around the globe.

About MINI
The MINI brand is represented by 1,300 dealers in more than 80 countries. Since 2001, over 1.8 million MINI, MINI Convertible, MINI Clubman and MINI Countryman models have been sold. As the presenting sponsor of the Burton Global Open Series, MINI will be supporting the renowned snowboard manufacturer for the first time in 2011. As part of this partnership, MINI has launched a special rider award that draws on the MINI philosophy of using space intelligently. The Creative Use of Space Award will go to the most creative snowboarders who make their mark through inventiveness, riding fun and aesthetics – values that apply in equal measure to Burton and MINI.

About Metacafe
Metacafe Sports Live is your hookup for hot-ticket events in the action sports world: Snow, Skate, Surf, Bike. Featuring interactive live webcasts of key competitions around the world alongside exclusive interviews with top athletes, behind-the-scenes featurettes, and must-see moments caught on video, Metacafe Sports Live is the go-to source that keeps action sports enthusiasts plugged in. Metacafe is the first entertainment destination solely dedicated to showcasing the best videos from the world of Movies, Video Games, Sports, Music and TV. Attracting 40 million unique monthly viewers worldwide, 15 million in the U.S., Metacafe is the go-to source that keeps today’s Entertainment Drivers plugged in. Tune into www.metacafe.com for exhilarating coverage of the 2011 Burton US Open. Get in on the action.

About TTR PRO SNOWBOARDING
Founded by Terje Haakonsen and industry innovators in 2002, TTR (Ticket To Ride) PRO SNOWBOARDING, is a non-profit, rider-driven organization. The TTR owns and operates the Swatch TTR World Snowboard Tour and the Swatch TTR World Ranking List and it strives to create the highest quality competitive snowboard environment in the world using authenticity, accessibility and innovation as guiding principles. TTR has developed the World Tour into the most exposed snowboard tour worldwide featuring a 10-month season calendar filled with hundreds of grass roots and major independent freestyle snowboarding events. Events are rated on a 1-through-6Star system, where all competing athletes earn TTR world ranking points based on the star level of each event; a 6Star event holds the highest allocation of ranking points. The top male and female riders are crowned TTR World Snowboard Tour Champion at the last 6Star event of the season – the Burton US Open. For more information, visit www.ttrworldtour.com.